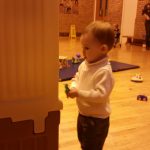 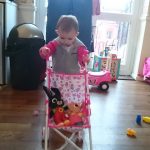 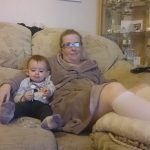 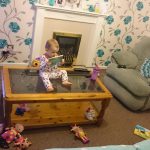 Ive been over to see nanny and she’s still broken 🙁 but hopefully friday she is going to attempt to walk on her foot and we might go somewhere but not sure yet as mummy said we will have to see what happens.

Went to school yesterday, well not officially anyway as daddy’s friend runs a playgroup right around the corner from us every tuesday and its only a £1 which daddy is well happy paying lol. We got there just before 9am and i was well excited walking through the gates and just started going crazy then it was time for daddy to carry me into the school hall where bit by bit they started bringing more and more toys out to play with, there was ride along big red cars and a police car, sand pit which i wasn’t very keen on the texture of sand, a kitchen with all the kitchen stuff like pots pans and knifes and folks as well as books, music playing in the background and musical toys as well. At first i was a bit unsure of everything and there was a few kids there as well but i soon settled in whilst daddy kept an eye on me from the side, for legal reasons he wasn’t allowed to take photos as he got told off for taking the one above of me.

At 10am it was time for the adults to clear up our mess and we had to move into a smaller room where someone was already making plates of white and brown toast and there was juice and chocolate biscuits which i had 2 halfs of toast and a drink with a milkway chocolate cake bar. we stayed until about 11.30 and dad has already arrange another playgroup on friday at some church 🙂 🙂