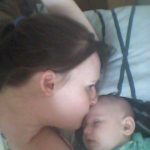 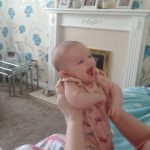 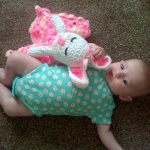 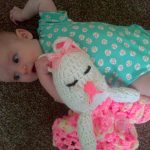 It been a rough fews days since coming back from our holidays in Scotland, after spending time with cousin liam and him not being well i think i ended up catching what ever he had as ive had high temperatures and been really unsettled and just generally not sleeping and being sick most of the time. Me and mummy haven’t really done much this week apart from chilling out and both of us trying to get sleep when we can as i haven’t been sleeping properly and daddy has been sleeping on the sofa the beginning of the week so me and mummy didn’t disturb him through the night what with him driving i really don’t want him falling asleep at the wheel.

Monday as i said was just chilling and Tuesday  after having a rough weekend i was kinda feeling a bit better but nothing amazing so mummy took me out to see if i would settle and we ended up over her friends house Katies for a couple of hours where i turned back into cranky baby every time Katie held me. whilst over her house Grandad and grandma owen decided to surprise me and mummy by turning up at the house without us knowing and had a surprise them self’s when we wasn’t in as we were over katies so grandad came and picked us round the corner and had some time with them for a bit.

Wednesday after sleeping 9.30pm till 4am it looked like things were on the up for me, i still wasn’t a 100% but mummy still made me giggle and smile alot. about 2pm grandad owen and granny came over with Margret and Tony which is grandad’s cousin and his girlfriend and spent a little time with them and just when i think im over things mum has to take me for my 12 week jabs at 4pm and now im back to not sleeping through the night which is understandable and hopefully i should be ok soon because im bored of feeling like rubbish, lets see what the next few days brings and i should be back to my normal self very soon 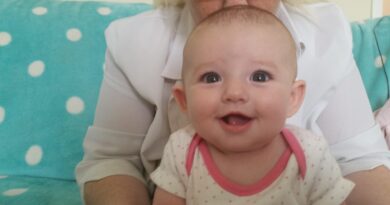 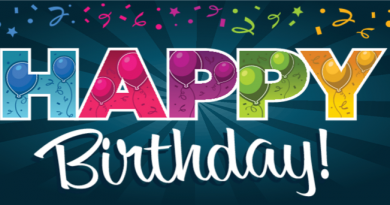 Its A Double Birthday Celebration!!!