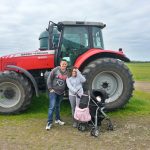 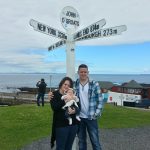 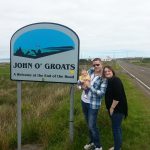 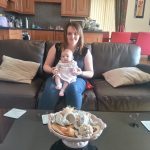 IM BACK!!!! hi folks im finally home after the longest drive in my 11 week life covering over 1300 miles and finally getting to meet most of my scottish family and it was lovely seeing everyone for the first time and im hoping it was the same for them? i managed to bust some smiles out and a few giggles but also had a few moans and screams along the journey but when your covering that much miles and going from place to place every few days its to be expected, even daddy got cranky but thats just him sometimes but i loves him x. The journey started of after daddy finished work on friday and he decided that because i sleep all night that it would be best to travel then and that way it wouldn’t be disturbing my sleep pattern and we should all be refreshed except poor daddy who had been awake since 7am friday morning. our first stop was Lancaster Services about 2hrs into our journey and then the next stop was Hamilton Services then it was non stop to Aberdeen and to be fair i could of slept the whole way through but being the first time we decided to take it easy and stop every 2-3hrs and thus arrived in Aberdeen at 0620am saturday morning where we all decided to have a couple hours sleep before going to visit Ganny and grandad taylor for the first time and give grandad taylor his long overdue birthday smiles.

After spending all day at granny and grandad’s we got back to the apartment about 2130pm where we all slept really well and was alot more refreshed sunday ready for another day of seeing granny and grandad taylor. later that afternoon me, mummy, daddy, uncle stuart, auntie amanda and cousin liam decided to try and go swimming and ended up at daddy’s old school grounds where his school was no more and they had built an amazing sports complex on it with olympic size swiming pool complete with diving boards and 10m high platforms going down in 2.5m increments it was truly beautiful but had to wait 1.5hrs until we could go in but after waiting all that time we ended up being in there about 15mins as it was way to cold and i was freezing and mine and cousin liams lips were quivering so we got out and got our money back. Later that afternoon me, mummy and daddy went to visit daddy’s old support worker from when he was in residential living and his support worker lived in stonehaven so it was a lovely afternoon drive and visit then after that we drove back to granny and grandads for a few more hours before it was bed time for me.

Monday was the start of our next drive all the way up to Wick taking 4.5hrs drive not including the stop in Inverness where we slummed it in tesco car park as the restaurant was closed for refurbishment so we finally arrived in Wick for about 1530pm where we were hoping to see my great nanny taylor but she wasnt feeling well and so we ended uip going to my great auntie coffee’s flat and unpack and get changed  ready to go over to my great auntie alysons house where we had indian take away and got to meet lots more of my scottish side of the family:

it was really nice to meet them all, i probably wont remember a thing but i was there lol. after that is was time to return to the flat and off to bed ready for our journey to John o Groats in the morning once we all get up and were ready. After finally all getting ready me, mummy, daddy, auntie amanda, uncle stuart and cousin liam hit the road and headed to John O Groats where uncle stuart took us on a detour of what he thought was the right way and ended up at Duncansby Head lighthouse so we decided to have a walk around and take in the coastal views of the Pentland Firth and spectacular stacks of Duncansby then eventually got back in the cars and ended up at the right place where the 60 year old sign post was and had lunch and some ice cream and also some more photos. Later that afternoon after heading back to Wick we finally managed to go and see great nanny taylor as she was feeling alot better so managed to have some lovely photos with her and uncle staurt and daddy managed to catch up with her as well. Later that evening we didnt really do much apart from have a meal in the weatherspoons then hav an early night as we all had to be up early to pack and hit the road again.

Around about 9am after everything was packed up and cleaned up it was time to hit the open road again heading on a 2hr journey to Elgin with 2 stops along the way and one important stop was to see great nanny taylor befor leaving wick to say goodbye as im not sure when i’ll get to see her again which made her day by seeing all of us. Finally arriving in Elgin at great auntie christines and great uncle allans farm around 3pm everyone had a cuppa while great auntie christine got to meet me and cousin liam for the first time and then it was time to slightly unpack and have a walk around the farm before chilling for the evening as well as meeting 2nd cousin Jennifer which was really nice as we were only there for one night and with all the traveling i was in bed for 8pm which was really good for me. Next morning we all slowly got up and had breakfast, chatted for a while whilst the cars were packed up and then it was back to Aberdeen to spend the last afternoon with granny and grandad taylor before daddy has to travel all the way back home with no sleep but on the way back down the road to home daddy did manage to have an hours kip near carlisle and i didnt wake up all the way home untill we got 40mins away from nanny owens house which was really really good, go me!! hard core traveler now.

Been a busy weekend 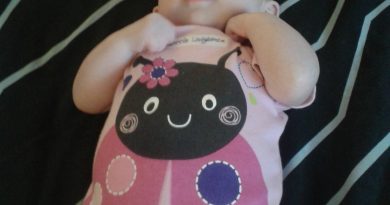